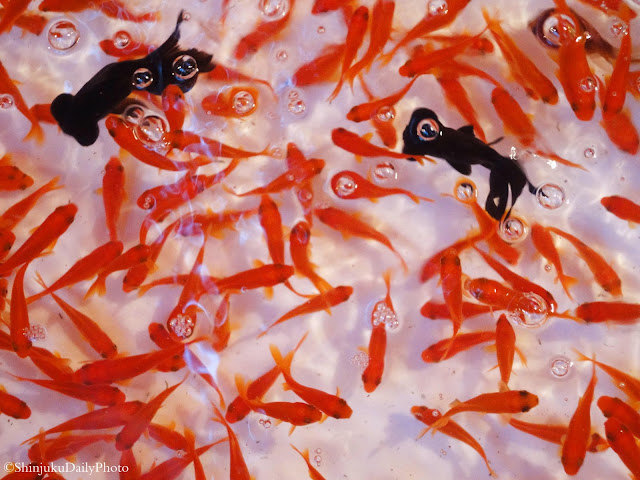 Have you ever tried to catch a fish with paper?

This was one of the booths at the Hanazono Shrine. "Kingyo Sukui (金魚すくい)," as we call it in Japan, means "scoop goldfish," and that is what we literally do...with a paper scooper-upper (not the official name, obviously).

The point of this game is to cleverly use the paper scooper-upper (which is actually called Poi (ポイ) in Japanese) and scoop the tiny goldfish into your bowl. When the paper breaks and you no longer can use it, that's when the game is over.

You can see the little boy going for a fish in the photo...but this is a pretty hard game and not very many people at these festivals can scoop the goldfish. The little boy didn't have any luck either and the paper on the Poi broke when he enthusiastically tried to scoop a goldfish out of the water. But they gave him one goldfish anyways, just for trying! 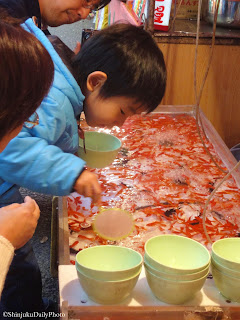 If you're interested, there is actually a National Goldfish Scooping Tournament every year in Japan. I know, it's practically a national sport! haha.

This year over 1800 people participated and the person with the record scooped a total of 87 goldfish in just 3 minutes! How about that!
Posted by Kaori at 9:51 PM